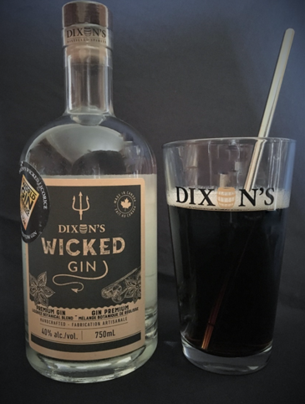 With a nod to gin’s rich history, Dixon’s developed its Wicked Licorice Gin recipe using pure spirits distilled from Ontario-grown corn and the all-natural flavours of licorice and anise, along with five other traditional botanicals. Earlier this year, Dixon’s Wicked Licorice was named Best Canadian Old Tom Gin at the 2018 World Gin Awards.

“It has a slightly sweeter, richer flavour than your typical London Dry Gin, which is the style of gin that most people are familiar with these days,” says Dixon’s co-founder Jeremie (JD) Dixon. “Up until the middle of the 20thcentury, Old Tom Gin was the most popular style and was an essential ingredient for any well-stocked cocktail bar. It’s incredibly versatile and suits any season — refreshingly different from the dry, tart gins that you might use in a summertime gin and tonic.”

All types of gin derive their flavour from juniper berries and a mix of various botanicals. Old Tom Gin originated in 18th-century England, where it soon supplanted Genever-style gin that dates back to 16th-century Holland and was made with a malt wine base. London Dry became the predominant style following Prohibition and the Second World War, but Old Tom has been enjoying a revival in recent years.

The Dixon’s team began developing Wicked Licorice by “playing around at home” with different combinations of botanicals until they arrived at the right balance of flavours.

“You need botanicals that will mesh together in the distilling process. There’s a lot of trial and error,” says Dixon, pleased to be expanding the company brand with another unique, fun product as Dixon’s Distilled Spirits celebrates its fifth anniversary.

“I love the position we’re in today compared to even a year ago. We’ve got a great team working together to make great products, getting behind a great story and building it together,” says Dixon. “We’ve grown year-over-year in every category. I think where we’re winning people is flavour — we say our gin is ‘Wicked Smooth’ because it is. It’s subtle, not overpowering, whereas some other gins have a bold, strong taste that turns people off. Wicked Citrus is so smooth and versatile and as for Wicked Licorice — who would have thought you could mix gin with root beer? It’s awesome!”